This has been sitting on my desktop for a long time. Good conditions (by our standards) on September 25 enabled this capture. 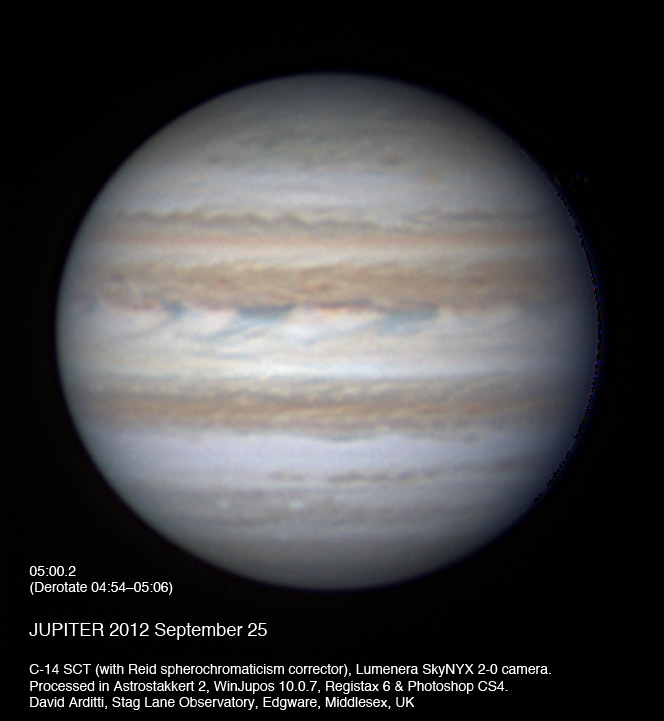 As people may be interested in the method, here is a brief explanation:

The observatory was opened and the telescope was allowed to stabilse for an hour to ambient temperature. It was then pointed at Aldebardan and the image was focused on the detetector and then defocused  by anticlockwise adjustment of the knob to produce a diffraction pattern. The telescope was collimated to perfect the symmetry of the pattern with the star centred on the detector. The telescope was then pointed at Jupiter and focused, with the final turn of the focusing knob being anticlockwise. The final focusing was with an electric Crayford focuser. A sequence of one minute videos was taken through filters in the sequence RGB,RGB,RGB,R as quickly as possible, at 30fps. Between each filter, exposure was adjusted to keep the histogram 70% full, but focus was not altered.

Each video was stacked in Astrostakkert to produce an image. 1.5x drizzle setting was used to get a bigger image. Each image was then wavelet sharpened and re-saved in Registax. Each of these images was then “measured” in WinJUPOS. The measurement files thus produced for all the R images, and all the G images, and all the B images, were then combined using the WinJupos “derotate images” function to produce master R, G and B images for the session. These “master” images were then themselves “measured”. The measurement files produced were then used in the “derotate RGB frames” routine to produce the RGB image (with no Luminance). That image was imported into Photoshop as a 32-bit TIF (on a different computer), sharpened further using an unsharp mask, and optimised for brightness and gamma curve. Lastly the observing details were added and the Photoshop file was exported to JPG for posting.