I got this title from my friend Eric Emms (one of the organisers of the excellent Baker Street Irregular Astronomers), and when he came up with it on Twitter, I thought he has being rather rude about astro-imagers in general. All astro-imaging involves a good deal of processing and adjustment, and all astro-imaging is a kind of creative composing process. Generally, I take the attitude that ‘all is fair in love and war’, so long as what has been done, and the nature of the image, is clearly explained. However, outright fakery does sometimes occur, and this has come to my attention through recent events associated with APOD (NASA’s Astronomy Picture of the Day).

They featured on 2016 January 22 an image* purportedly showing the International Space Station transiting Saturn. This looked spectacular, but also odd and surprising to many experienced astro-imagers like myself. Detective work by various people has shown that this image is a fake. I won’t go into here the mountain of evidence for that, as it is extensive on the web now. The author of the image, Julian Weßel, subsequently deleted it from his website, and also made private a video which had previously been visible on his YouTube channel that purported to be the actual original video from which the image on APOD had been created.

However, I became more involved with this issue when I noticed that Julian Weßel also had on his site a purported image of the recent close conjunction of Saturn and Venus. I successfully imaged this on the morning of January 09, and my image, below, has been widely distributed on Twitter and elsewhere on the web. It is the only image of the event, so far as I am aware at the moment, that was taken. 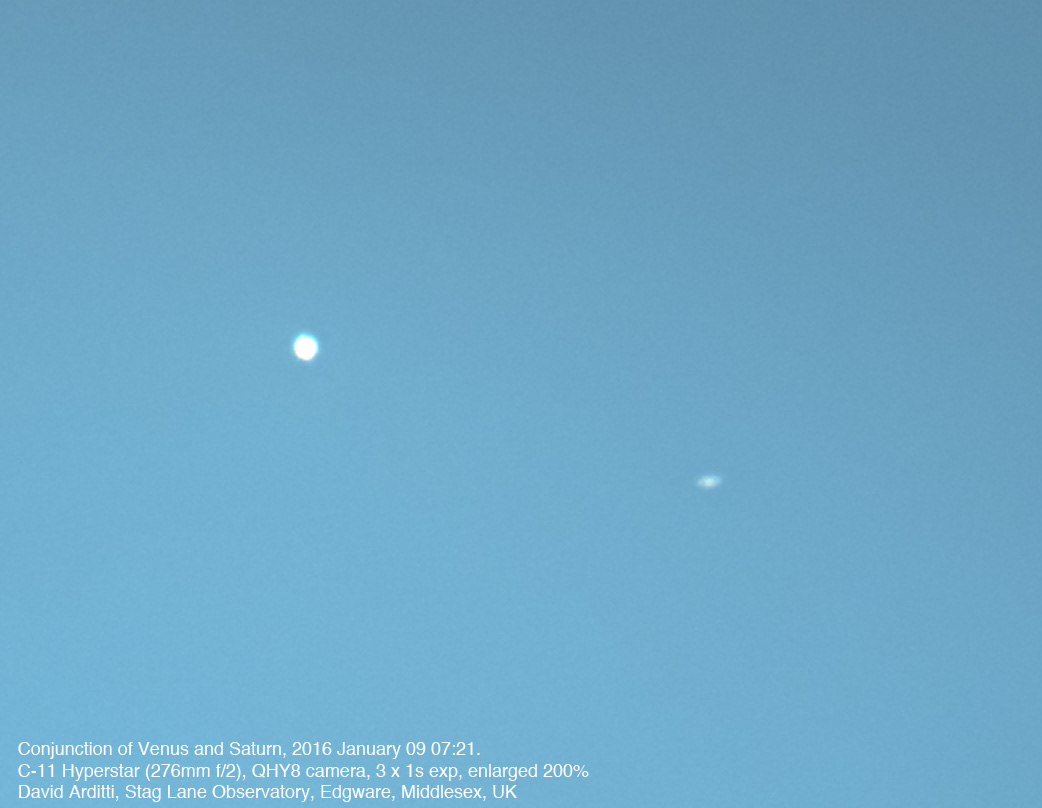 So I took a close look at Julan Weßel’s claimed image† of the same event: Like the Saturn-ISS transit one, this ‘image’ can be shown to be an absolutely clear fake also, on many lines of evidence:

1. He posted it on Instagram  and Twitter  on the evening of January 8. This was about 10 hours before the closest conjunction that was visible from Europe, that I imaged, on the morning of the 9th.

2. If you compare my image with his, you will see he has the distance from Saturn to Venus wrong and the angle between the ansae of Saturn’s rings and the Venus-Saturn line wrong. His image could geometrically be a true representation of an earlier moment of the conjunction, as Venus was travelling away form Saturn, moving to the left (east) when I took my shot. But that moment would not have been visible from Europe, and there’s no evidence that he went out of Europe to take his ‘image’.

3. My image was taken in a very narrow, critical time-period of less than half an hour when the pair were high enough above the horizon to get any sort of recognisable image of Saturn, but the sky had not brightened enough to make Saturn disappear. The sky is very bright in my image (in fact I darkened it compared to the raw shot). The sky in Julian Weßel’s ‘image’ is dead black, as illustrated by an extreme levels stretch of his JPEG in Photoshop: 4. There is absolutely no way that the faint moons of Saturn were imageable in the bright sky in which the conjunction was visible, but there they are in Julian’s ‘image’.

5. The blotchy residues and colour blocks around the celestial bodies in the stretched image above makes it look likely that all the elements of his ‘image’, Saturn, the moons, Venus and the star above Saturn, have been pasted onto a canvas separately.

Right now! Venus is only 5.1 Arch minutes seperated from Saturn. Nice to See how fast the movement between These two planets is.

This implies he was watching the event, but the Tweet was posted at 9:57PM, when the planets were below the horizon from Europe!

It looks to me like he got the orientation of the scene at the moment of closest conjunction (visible somewhere in the world) from a planetarium program and made a composition around that. The image of Venus he used looks like he might have taken it around that date, but the image of Saturn and its moons is totally impossible to have been taken this year from Europe (like his Saturn image with the ISS transit) as Saturn is currently too low in the twilight. It looks like he pasted in a Saturn image he took last year, or got from somewhere else, and rearranged the moons.

I am afraid to say it looks like with Mr Weßel we are dealing with someone who notes when close approaches of objects occur in the sky, then cooks up synthesised images of those events from available information and bits of his own imaging, and places them around the web with minimal information (such as date, time, location etc.) that would allow them to be verified or disproved, and with vague captions that imply he has witnessed and successfully imaged the event, but don’t (as in his Twitter and Instagram postings I have referenced) explicitly say he has imaged it, and don’t explain what methods he used.

I call this fraud. I expect his  image and video claiming to show a transit last year of the International Space station across the disk of Jupiter  is entirely fake as well.

There have been other occasions in the past of unacceptable practice in astro-imaging. An outstanding image of Jupiter by Damian Peach was altered by a fraudster a few years back and passed off as his own, but Damian detected the fraud. That was simple theft, but in this case we have images that could have been presented, and captioned, as ‘simulations’, based on genuine original pieces of astro-imaging, and would have then been acceptable, but have been misrepresented, probably for publicity or gain (as Mr Weßel trieds to sell prints of his picture from his website). This behaviour not only confuses the general public but harms the reputation of amateur astro-imaging in general and undermines the hard work of the vast number of excellent, dedicated, careful and conscientious amateur astro-imagers who go to great inconvenience and expense, get up at all times of the night, make themselves cold and uncomfortable, and dedicate huge amounts of time to the preparation, acquisition, processing and presentation of genuine and sometimes revelatory works of scientific representation. These are ‘creative’ works as well, in a general sense, but so long as we are clear exactly what processes lie behind them, we have scientific integrity.

Transgressions of this nature are therefore worth going to the trouble of exposing and publicising, as I am doing here. We should have no sympathy with anyone who breaks the trust vital to progress in our field  by passing off images as something they are not.

Parts of this text I published previously on Starship Asterisk* forum

*Update, January 26 00:15UT: NASA have now removed the offending APOD and all associated text from their site and replaced it with a completely different item for January 22.

†Further update, January 26 15:00UT: Julian Weßel has now made an apology (at least from the ISS Saturn transit image) and stated he has “deleted all pictures from my Website etc at which it wasn’t clear where it’s from and how they processed”, which includes the Venus-Saturn conjunction image.